Upcoming Events
17 November 2021: XVth Prizes for History "Duke d'Arenberg"
30 March 2022: Book presentation: "Who Will Have My Back" - cancelled due to the Coronavirus
Categories 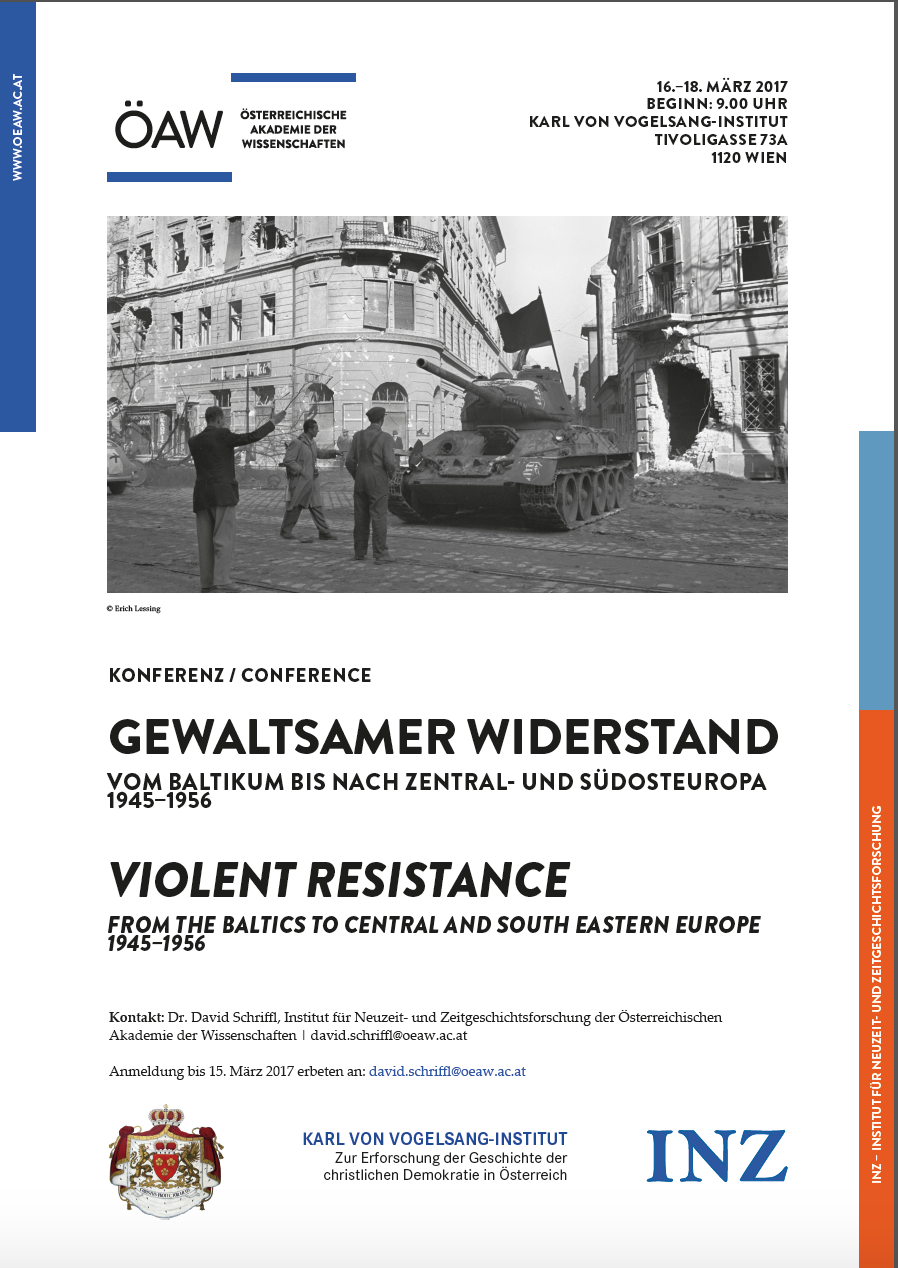 It is a great pleasure to welcome you  here at the Institute von Vogelsang for an exceptional seminar where you are going to address one of the most forgotten and unknown chapters of European history, namely the armed resistance in central and east Europe between 1945 and 1955.

This seminar wouldn’t have been possible without our friends from Austria, the country formally located between East and West Europe.

My thanks go above all to professor Michael Gehler and dr. David Schriffl for their support and great help since the beginning of this project.

Many thanks as well to the Institute von Vogelsang and its director for their great technical support.

Thank you to all of you for being here and for having travelled from distant countries to be with us today.

The purpose of this seminar is to give young historians from Central and East Europe the possibility to report in a factual and scientific way about their field of expertise. And this field of expertise is quite unique since it has not been explored enough, if at all, in the past. I even dare to say that the seminar may be the first of its kind.

Europe has been a tremendous success story since World War II and when I speak about Europe, I mean first of all West Europe.

As we know, we were six countries when we began this long trip together more than sixty years ago and now we are (still) twenty-eight. At least six other countries would like to become members and are waiting patiently to be taken in.

True, the last years have been difficult, even dramatic, but can you expect a smooth ride if you decide to join forces and try to realize something of this magnitude together, something that has never been tried before ?

Since the financial crisis of 2008, our common currency, the EURO has shown its weakness since it is split between contradictory financial cultures.  More, the amount of our national debts is staggering and our national governments seem incapable of reducing it, even with negative interest rates, a first in my life time.

If growth is not restored on a healthy base, the centrifugal tendencies observed in the last years will become stronger. New populist parties will replace the old ones that have been in power since WW II and put the European construction at risk.

This would be bad news for all of us since we are not going to be able to compete politically, economically and culturally with the existing and emerging great powers like USA, CHINA, RUSSIA, INDIA and BRASIL if we don’t stick together.

In the last two years, the north/south tensions have been exacerbated by new east/west tensions since the opening of European, read German borders, to millions of people, refugees or simple migrants, proving the ineffectiveness of the Dublin and Schengen treaties supposed to regulate the migration flows and to protect common borders.

Last year, European inflexibility regarding the free circulation of people within the European Union has prompted the UK to leave, a move that bodes ill for our common future and that weakens dramatically the potential of a political union in our life time.

Something seems to have been forgotten by the old members  of the European Union, namely that the national narrative in Central and South East Europe has been quite different.

Joining the European Union after the fall of the Soviet Union probably had a very different meaning the new partners in the West didn’t understand. If for West Europeans, a lasting peace between France and Germany was of paramount importance, it seems that many countries in the former Warsaw pact had something else in mind.

Above all, they wanted to catch up economically after decades of stagnation due to an ossified ideological and political system ; so they got massive help up to this day to improve the lives of the people and this has been a tremendous success. Last year, Brussels dished out 13 billion  Euros for Poland, four or five billions  Euros for Hungary and Rumania. It shouldn’t be forgotten.

Another idea, certainly a strong factor in Poland and in the Baltics was to join a strong military alliance to get a first class protection within NATO.

But it is more and more obvious every day that the new members didn’t want to exchange one “yoke” for another and that EU membership meant above all preservation of their sovereignty as much as possible and not surrendering it to a supranational body located in Brussels.

Hence our efforts to give the stage to people we don’t hear about every day, namely all of you, to explain to your cousins from West Europe the last decades of your respective collective experiences in a honest way and without any taboo.

Let’s the facts speak for themselves and let’s ask ourselves some very important questions from the beginning :

-      How is it possible that so many West Europeans have no idea of what happened behind the Iron Curtain at the end of the second World War ? What is because of the Iron Curtain ? What is the fear of getting bullied by uncle Joe, Roosevelt’s partner at Yalta ? Was it ideological blindness at a time when the powerful West European elites and between 20 and 30% of the voters gave their voice to the Marxist Leninist communist parties supposed to save the world ? Was it and is it a sheer lack of interest for our cousins from the East or even worse simply a lack of interest for History and human destiny ?

-      How did the freedom fighters/terrorists/rebels fight all these years without any support from the free world ? How did their logistics work ? How did the civilian population support their long fight ?

And why is the Arenberg Foundation involved in organizing such a seminar ?

In the early nineties, I was staying with an acquaintance in the Russian quarter of Vilnius where I was learning the language. While we were walking in the streets, we saw guards standing in front of building. We went in and realized that it was the KGB building that had just opened for everybody to see. And we saw shredded documents in plastic bags, open drawers, a torture chamber with stained blood on the walls, a prison cell and above all those photographs pinned on the walls.

These photographs were documenting the tragedy suffered by the “brothers of the forest” at the hand of the NKVD agents who were tracking them down like game and were killing them accordingly in the decades following the second World War.

I had read a little about their ordeal before but I swore to myself that, one day, I would help documenting these dark years.

The “brothers of the forest” were not alone and other armed groups fought very bravely, in total obscurity and against all odds for the freedom of their countries annihilated by the Soviet juggernaut.

And here are the Albanians, the Balts, the Poles, the Serbs, the Romanians, the Ukrainians and others to speak out and give us some insight views about those tragic events.

Documenting events is the best possible way to keep a collective memory alive. Later, decision makers in politics, economy and culture can make use of it. But the first step is documenting with accuracy and honesty.

The Arenberg Foundation is fighting for the promotion of History and Culture in Europe for many decades.

We are small, fast, completely independent and try to help young and energy loaded historians preserving our collective memory at an European level.

Without a honest, open and knowledge-based dialogue  between people, there can be NO progress in the build-up of a European Union that can take on with the big powers of today and tomorrow, namely once more : USA, CHINA, RUSSIA, INDIA, BRASIL and others.

If we are weak, we disappear. If we are strong, we get a fair hearing since others will listen carefully.

We have two Prizes for History, one Prize promoting European student exchange within the Coimbra Group of Universities and one Prize for federal studies in cooperation with the College of Europe (Bruges, Natolin) where we try to promote a better knowledge of mechanisms that allow different people to live together in prosperity while keeping their national identities.

We also publish books, organize seminars, concerts and conferences in different countries and have opened our archives to the public.

We organize European old timer rallies as well as exhibitions.

We also fight for a museum we would like to open for the benefit of all of us.

Finally, and we are going to have time to discuss this further during our time together, we offer a communication platform to all of you. I hope that you are going to keep in touch since it is very important that your collective voice be heard in Brussels and here are a few ideas I would like to share with you to reach that objective :

-      We are going to publish a book/minutes of your scientific contributions. Everybody is heartily invited to write a short summary of his/her exposé in his/her national language as well since we not only want to show respect but document at the same time European diversity. To do so, no better idea but to show the diversity of our languages.

-      We want to share this information because we think it is very important that people in the West learn more about your national histories and your collective memories, especially if it concerns some dark areas of the European past nobody wants to hear about. We are going to send this book/booklet/minutes to our decision makers, be it in your respective countries be it in Western countries be it at a European level, namely to the European president, to the president of the European commission, to the president of the European parliament, hoping by doing so to give you the opportunity to show up together again and team up in a truly European manner.

-      To finish my introduction of this seminar, I would like you to start thinking about a huge project that could keep us busy for years to come, namely the collection of individual memories to document what happened between 1945 and 1955 in this epic fight. Steve Spielberg has shown the way when he collected in writing and in videofilming the living memories of the victims of the ‘Endlösung’, the ‘final solution’ applied to the European Jews between 1941 and 1945. To realize such a project, we need money. The Arenberg Foundation can put funds at disposal but, as usual, we don’t want and won’t be the only ones, the more so since we already have enough on our plate so far. We also need some intellectual support.  We finally need support from the countries where these tragic events happened. Let’s talk about it later on during the seminar.


I thank you for your patience and wish you interesting moments together.


For the Arenberg Foundation